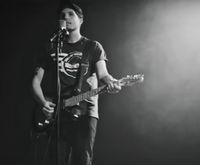 Bio: Raised in New York, Dunne got his start the old fashioned way, crisscrossing the country performing hundreds of shows a year as he built up a dedicated fanbase one night at a time. He released a pair of acclaimed albums along the way—2015’s ‘Songs From The Hive’ and 2017’s ‘Bug Fixes and Performance Improvements’—that garnered frequent airplay on SiriusXM and helped land him dates with everyone from Cat Power and Justin Townes Earle to Rosanne Cash and The Secret Sisters, alongside high profile spots on Cayamo and NPR’s Mountain Stage. His 2020 release, "Selling Things" was released to critical acclaim, with Rolling Stone calling the lead single a "stunner." He currently lives in Brooklyn with his wife and cat.