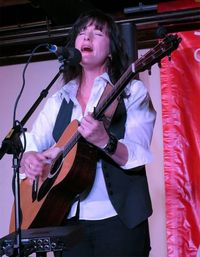 Louise Mosrie grew up in McEwen, TN on a cattle farm - riding horses and writing poetry. In 2008 she began writing songs about the South and working on an album called “Home”, which debuted at #1 on the Folk DJ charts in January 2010 and went on to be one of the most played albums that year for that chart. Her most recent album, “Lay It Down”, including 10 songs of love, loss and surrender is a collaboration with folk-rock songwriter/producer, Cliff Eberhardt, who envisioned that minimalist arrangements and restrained production would allow the emotional songs and Louise’s voice a stark relief to rest and shine in. In her live performances, audience members often tell her that they enjoyed the stories between the songs as much as the songs. But it's her warm personality and strong expressive voice that captivates and holds her audiences attention. https://louisemosrie.com/home

To come to this show please email me at: farmhouse103music@gmail.com