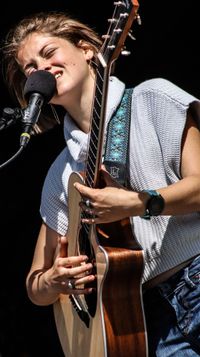 Before finishing high school, Alaska singer-songwriter Ava Earl has checked off many life dreams - opening for Maggie Rogers, playing music festival main stages, getting recruited to run track and cross-country at Northwestern University, and releasing her fourth studio album, The Roses, released July 23, 2021 (produced by JT Nero (Birds of Chicago) with backup vocals by Allison Russell). Having written hundreds of songs and performing on nearly as many stages, her creative output outpaces her years. She’s a person in perpetual motion, the finish line never quite crossed and the last note never quite hit. Her momentum, in step and song, doesn’t let down. “I’m addicted to writing songs. I don’t think I could stop if I wanted to.” It’s the same with running, which in tandem, provides a cathartic release that allows her to sing about self-realizations and feelings that for many–no matter the age–are buried deep within one’s psyche.